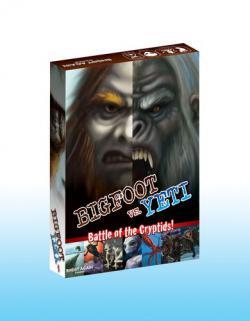 A battle is brewing between the undisputed king of the cryptids Bigfoot and his stone cold cousin the Yeti, who is sick of playing second fiddle.

In Bigfoot vs. Yeti, you are an up and coming cryptozoologist mounting expeditions in the hopes of proving the existence of unknown creatures such as Bigfoot, Yeti, The Loch Ness Monster, the Jersey Devil or Extraterrestrials. Your ultimate goal is to gain fame and fortune by being the first cryptozoologist credited with the actual discovery of a new species, making you world famous. Somehow you have landed yourself smack dab in the middle of feud between Bigfoot and Yeti so it's time to choose your side as it will help shape the fate of your research and ultimately your success!

During each turn in the game, players draw from either the Unknown (deck) or from the top of Tabloids (discard pile). Each player mounts or joins expeditions for the various cryptids in the hope of reaching ten or more points in play. If ten or greater points is achieved that expedition would be considered to have found enough proof for science to take notice, thereby doubling that expedition's score. Also during each turn a single Action card may be played which can do things like strengthen the value of an expedition in play, retrieve cards from the Tabloids or manipulate other facets of the game. Each cryptid has an ability that will help you in some way and is triggered when you play them. At the end of a round, cards in the Tabloids that match expeditions in play discredit that expedition. The game also has a shutout rule involving Extraterrestrials that, if achieved, prevents all other players from scoring that round.