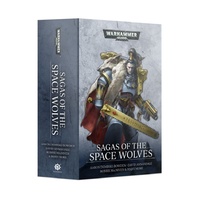 A Space Wolves omnibus Many are the sagas of the Space Wolves, told around the fires of the Fang during the long winter. Collected here are a host of such heroic tales, detailing the exploits of the greatest heroes of the Sons of Russ. READ IT BECAUSE Discover tales of your favourite Space Wolves heroes in a host of thrilling tales that will show you all sides of this most heroic of Space Marine Chapters. DESCRIPTION Born on the icy world of Fenris, few amongst the brotherhoods of the Adeptus Astartes are as fierce or as noble as the Space Wolves. Long are their tales, told around mead halls or the flickering glow of a hungry fire. Heed them well, for they speak of legends like the Young King Ragnar Blackmane, whose thirst for battle is matched only by his heroism, or the Wolf Lord Logan Grimnar, that most venerable and fearsome of warriors, who leads the Chapter itself. So listen hard and listen carefully to the skald as he holds forth around the burning fire, because there is darkness in these sagas as well as light. CONTENTS Ragnar Blackmane by Aaron Dembski-Bowden Curse of the Wulfen by David Annandale Legacy of Russ by Robbie MacNiven The Hunt for Logan Grimnar by Ben Counter, Steve Lyons, Rob Sanders and C L Werner Blood on the Mountain, Arjac Rockfist: Anvil of Fenris, Iceclaw and Twelve Wolves by Ben Counter Thunder from Fenris and On the Heels of Morkai by Nick Kyme Reparation by Andy Smillie Logan Grimnar: Defender of Honour by Cavan Scott In Hrondir's Tomb and Hollow Beginnings by Mark Clapham Engage the Enemy by Lee Lightner Stormseeker by Alec Worley