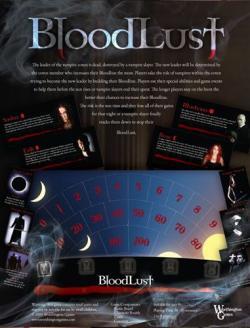 The leader of the coven is dead and the quest is on for between 2 to 10 players to be the vampire who adds the most to their bloodline and becomes the new leader.

Fast playing card game using the vampire genre. Beautiful cards, rules, and board brings the game to life. Players add to their bloodline by staying out on the hunt, but the longer you stay out the better the possibility of daylight, and if you're out and the sun comes up then you could lose it all.

Before each card flip players must decide whether to stay on the hunt with the possibility of more increase or loss to their bloodline, or getting out and holding their bloodline gains for that round. If players stay in and a daylight card is drawn that brings the sun up then any players still in the round lose all of their gains for that round. A number of rounds are played depending on the number of players.

Players can play their powers depending on the situation which can help them and other players or hurt other players. The game plays in 30-60 minutes. Includes box, mounted board, rules, cards, and counters.