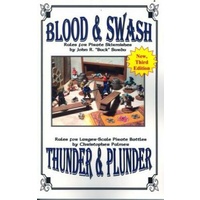 Two systems, Street Skirmishes and Bloody Brawls between the King's Men, Ruffians, Pirates, and Rogues of the Caribbean and the Colonies. Blood and Swash by Buck Surdu is for small brawls involving about four figures per player. Thunder and Plunder by Chris Palmer is for larger battles involving small units of eight to ten figures. The two sets are tightly integrated so that the heroes from Blood and Swash can act as leaders in Thunder and Plunder, and vice versa. Innovative system includes Scenario and Chart insert for "GLADIATOR" game and modification data for fighting numerous other peiods from Ancient to Modern.

Included in this booklet are a skirmish set of rules for barroom brawls among groups of pirates and a tactical set of rules for larger pirate actions. The rules are a tightly integrated pair so that the more detailed Blood and Swash figures can be used as leaders in a Thunder and Plunder game. Both sets of rules are extremely simple and have proven extremely popular, flexible, and enjoyable since their original printing in 1999. The text in this new edition has few additions from the second edition, but it has a new color treatment and additional artwork.