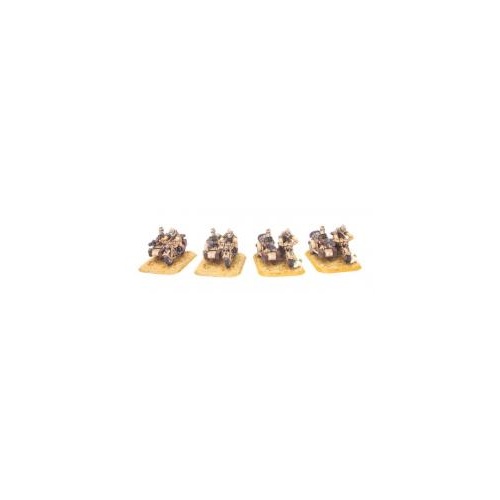 The BMW R75 was first produced in Germany in 1941 specifically for military use. This military design proved reliable in all climates, from the freezing cold of Russia to the blistering heat of the desert.

The BMW R75 motorcycle combination remained in service with the German Army for the whole of World War II. It’s function as a reconnaissance vehicle was largely taken over by the VW Kubelwagen and other light and medium car types from the mid war on, though in the desert it was still often employed in this role.

An Afrikakorps reconnaissance battalion in 1942 was comprised of a mixture of Kubelwagens and motorcycles.

Typical are stowage cases on the sidecar and motorcycle, which were used to carry ammunition and the crew’s personal equipment. The MG34 machine gun was mounted on a bar atop the sidecar. In desert operations it was a common practice to keep the breech of the gun covered to prevent sand from getting in. In Flames Of War

In Afrika you can field your BMWs in your Panzerkompanie Scout Platoon, either as motorcycle combinations (with sidecars) or solo in pairs (without sidecars). These guys take full advantage of the Reconnaissance rules.

You can also mount your Aufklärungsschwadron combat platoons on BMW motorcycle combinations. Their excellent mobility (16”/40cm on roads and 12”/30cm cross-country) makes them a great asset in this role.

They are also often found as command transport vehicles in a variety of platoons.