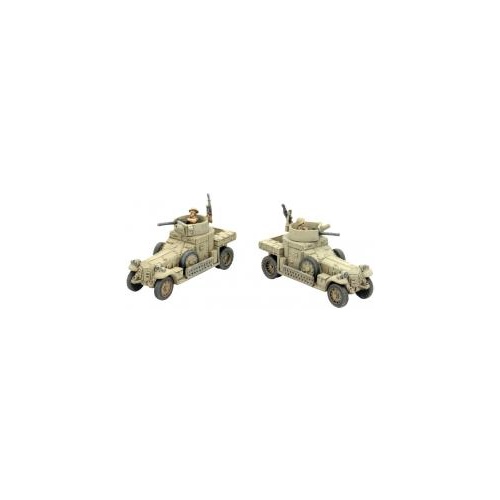 The origins of the Rolls Royce Armoured Car go back as far as 1914 when the Royal Navy Air Service (RNAS) set-up an airbase in Belgium and required a vehicle in order to rescue downed pilots. After several ad-hoc designs, an official design was produced in December 1914 making use of the chassis of the Rolls Royce Silver Ghost.

A steel superstructure was constructed to provide protection for the crew and a rotating open-topped turret place on the top, rear of the vehicle.

In order to cope with the additional weight of the superstructure; twin wheels were fitted to the rear of the vehicle. Armament was provided by mounting a Vickers machine-gun in the turret, however it was quickly learnt that an enclosed turret needed.

By the beginning of World War Two the Rolls Royce armoured car had received some minor improvements including the wider wheels and the addition of disc brakes. The Rolls Royce armoured car saw action during the desert campaign in North Africa in 1940; retro-fitted with a Boys anti-tank rifle in an open top turret. But it soon became clear that the design did not belong on the battlefield and was replaced by armoured cards of a modern design.