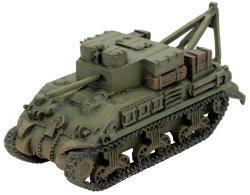 An ARV (Armoured Recovery Vehicle) is a vehicle used to recover battle damaged or broken down vehicles during combat in order to complete more extensive repairs behind the frontlines.

The first true ARVs came into being during World War Two and saw service with most nations during the conflict, the United Kingdom being no exception.

With the common practice to covert either an obsolete design or adapt a current tank chassis into an ARV, the British answer was to convert an American M4A4 Sherman (Sherman V) chassis.

It was fitted with a dummy fixed turret and dummy gun in an attempt to make it indistinguishable on the battlefield.

Both a front and rear jibs could be fitted to the vehicle for recovery purposes to assist in the winching process in addition to an earth spade which provided extra traction when the winch was used for pulling.

The Sherman ARV uses the Recovery Vehicle rules found on page 41 of the main Flames Of War rule book.