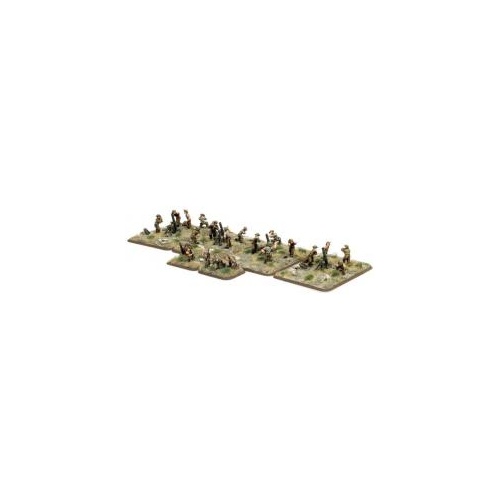 The 4.2" mortar was introduced in 1942 and it became the standard British heavy mortar of World War II. The 4.2" mortar can be broken into three loads for transport (barrel, tripod, baseplate) and also had a light wheeled carriage was available so the mortar could be moved short distances by the crew or towed behind a light vehicle.

When first introduced the ammunition was made in heavy cast rounds, the result was a shortening of the potential range. Lighter and improved rounds became available in 1944 increasing the range (from 3000 to 3800 metres).

From about mid-1943 the divisional machine gun battalions (one per infantry division) converted one MG company to 4.2” mortars (16 mortars in 4 platoons) and RE stopped using them.

4.2” mortars were often used for counter-mortar tasks under the control of the counter-mortar staff, not least because they could reach enemy mortar positions on reverse slopes.

These excellent weapons have a range of 48”/120cm, AT -/1 and FP 2+/4+ and can fire Smoke. The Man-packed special rule means they are not slowed by rough terrain just like infantry. Like their smaller brothers the 4.2” still gets to re-roll its first ranging in attempt if they fail.

Designed by Evan
Painted by Jeremy