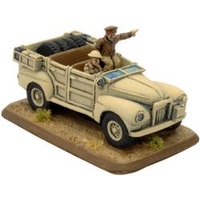 John Charles ‘Jock’ Campbell was born in Thurso, Scotland in 1894. As a young man he joined the Royal Horse Artillery. In 1940 he was in Egypt with the 7th Armoured Division, commanding the artillery.

During Operation Compass British forces pursued the retreating Italians back into Libya. Campbell was put in command of the Royal Horse Artillery units of the division and sent ahead of the tanks. He joined the armoured cars of the 11th Hussars near Beda Fomm and outflanked the retreating Italians. Campbell’s men held the roadblock, pouring fire onto the Italians, which eventually led to the destruction of the Italian 10th Army. For his part in the battle Campbell was awarded the Distinguished Service Order (DSO).

In September 1941 Campbell took command of the division’s support group (all the non-tank units) as acting Brigadier. On 21 November, during Operation Crusader, the 7th Armoured Division was attacked by two panzer divisions while defending the airfield at Sidi Rezegh. Campbell’s gunners and riflemen held their ground under repeated attacks. Wherever the fighting was hardest Campbell was there encouraging troops and directing the defence. He would join his guns, even lending a hand manning them, directing fire against panzer attacks. On one occasion he was heard to cry, “Here they come, let them have it!” as another volley of 25 pdr shells was sent towards the attacking Germans tanks.

The following day Campbell, impatient with the lack of tank support, set off in his car to remedy the situation. He found the 4th Armoured Brigade making their way towards the fight. He led the 3rd Royal Tank Regiment’s ‘Honey’ Stuart tanks into the fray in his Ford car. During the day’s fighting he was wounded, but he refused to be evacuated. However, Campbell was forced to finally withdraw his men on 23 November after the Germans had destroyed nearby brigades. For his actions at Sidi Rezegh Campbell was awarded the Victoria Cross.

In February 1942 Campbell was promoted to command the 7th Armoured Division. Unfortunately he was killed just three weeks later when his Jeep overturned on a newly laid road.