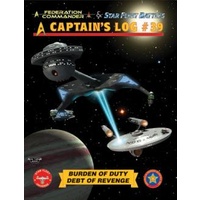 The issue begins with a major fiction story (Burden of Duty, Debt of Revenge) about a old Federation CA which catches a Klingon DX raiding behind the lines. Other fiction, and Part 4 of the Developmental History of Heavy Superiority fighters are also included.

The communications sections includes news, tournament reports, After Action reports on recent products, Command the Future, Jean's Pet Peeves, the Proposals Board, new ships for Starline 2400, Why, and Awards.

Fans of Star Fleet Battles get ten scenarios, six new ships, the Energy Monster, Sniper Squads, Ask Admiral Growler, Kzinti vs Romulan Anarchist ships, the Truth about Federation fighters (most of which did NOT have gatlings), a campaign update for the Early Years, Battlegroup Sector Patrol, a Branthdon Primer, Victory at Five Nations, and Term Papers.

F&E Fans will find new rules and rulings, their own Proposals Board and Why articles, the Ship Information Table for the new ships, and lots of tactics.