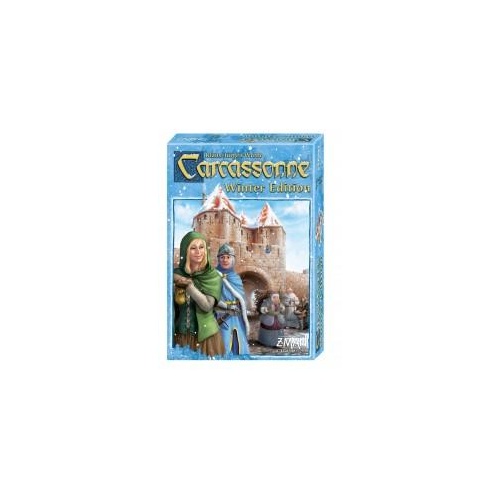 Snow arrives in this Winter edition of Carcassonne. You continue playing the game as before in building the area around the city, one tile at a time and placing followers on fields, cities, roads and monasteries. These followers will respectively become farmers, knights, thieves and monks. The game uses the same 72 tiles, except these are covered with snow. Plus an additional 12 new animals tiles are introduced for local animals to accompany the followers – including one bizarre Wolpertinger from Bavarian folklore, which is an antlered, winged rabbit! The winner, as in the original version, is who has the most points at the end of the game. It is for 2 to 5 players from ages 8 upwards, where average playing time is 40 mins. This game is very visually appealing and this may in particular appeal to younger ones who have yet to play and catch the Carcassonne bug!

This edition can only be played with a few of the expansions – the Phantom, the King and Robber Baron tiles and the Messages. If you’re looking to play Carcassone with other expansions then you’ll need the original game.