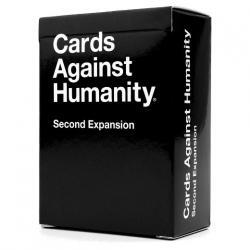 Hot damn! Another official expansion for Cards Against Humanity that adds more hilarity for us horrible people that like to play.

This expansion adds 25 new black question/statement cards and 75 new white answer cards to the deck as well as 12 blank cards for players to come up with their own card ideas. And to top it all of, it's dolphin-safe!