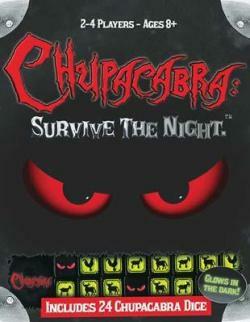 For over a decade, and all over Latin America, goats, burros, chickens, and other farm animals have been mysteriously found with puncture wounds on their chest and void of blood. Farmers and villagers have long told tales that a blood-thirsty creature is responsible for the death of their livestock. Some say the creature looks like a small bear with porcupine spines. Others say the creature looks like a mangy coyote or even an alien. Whatever you believe about the creature's appearance, one thing is certain--this creature likes to hunt at night, killing its prey with swiftness and ferocity while draining the blood from its victim. The locals call the beast responsible for these slayings "El Chupacabra", or "Goat Sucker".

Turn out the lights and try to be the last mammal standing in this survival dice game. Based on Latin American Folklore.

Can You SURVIVE the Night?