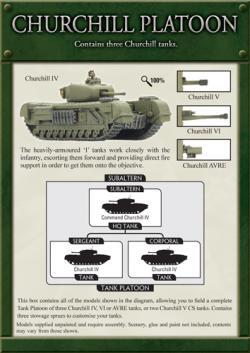 Churchills in the Normandy Campaign

Churchill tanks were amongst the first armoured vehicles to land on the beaches of Normandy in support of the Allied invasion of France on 6 June 1944. These were the specialised tanks of the 79th Armoured Division. Known as ‘Hobart’s Funnies’. These first tanks ashore were specialised Churchill AVRE (Armoured Vehicle Royal Engineers) tanks developed to perform combat engineering tasks, not the standard Churchills of the Infantry Tank Brigades.

The first proper Churchill tanks into combat, the 31st Tank Brigade (consisting of 7th and 9th Battalions, Royal Tank Regiment), landed at Juno Beach on 19 June. Later they were heavily involved in Operation Epsom, expanding the beachhead, and then Operation Jupiter, which sought to retake the infamous Hill 112. In these operations the brigade fought with 15th (Scottish) Division, 43rd (Wessex) Division and 53rd (Welsh) Division. The 31st Tank Brigade later fought in Operations Totalize and Tractable that took Falaise.

The 31st Tank Brigade’s third regiment, the 141st (The Buffs) Regiment, Royal Armoured Corps, had been converted to Churchill Crocodile flame-throwing tanks prior to the invasion. As such it was permanently attached to the 79th Armoured Division, and like all the other regiments of that division, was allocated out to different units along the front as the situation required.

The 34th Tank Brigade (consisting of 107th (King’s Own), 147th (Hampshire), and 153rd (Essex) Regiments, Royal Armoured Corps) arrived in Normandy in early July and its first action was Operation Greenline on 15 July (a series of diversionary attacks to distract the Germans attention from Operation Goodwood) with the 15th (Scottish) Division. The raids also assisted in tying down the Panzer divisions to the British sector of the front, so they were unable to interfere with the planned breakout from the American sector.

The 6th Guards Tank Brigade (consisting of 4th Battalion Grenadier Guards, 4th Battalion Coldstream Guards and 3rd Battalion Scots Guards), landed over Gold and Juno beaches on 20 July. Their first action was Operation Bluecoat, where they sought to take Hill 309 on the Caumont-l’Evente ridge from the German 326th Infantry Division in order to stymie any attempt by the enemy to contain the American breakout.

The attack proceeded well, but in the heavy Bocage country the tanks quickly began to outstrip their attendant infantry and in the end the plan was modified into what became the most concentrated infantry tank action of the war. In the course of a day the Churchill tanks covered six miles through terrain that would have stopped any other tank, before taking Hill 309, despite three heavy Jagdpanther tank-hunters from 654. Schwere Panzerjägerabteilung ambushing ‘S’ Squadron, 3rd Scots Guards, destroying eleven Churchill tanks for the loss of two Jagdpanthers in the space of a few minutes.

The Churchill Tank in Flames Of War