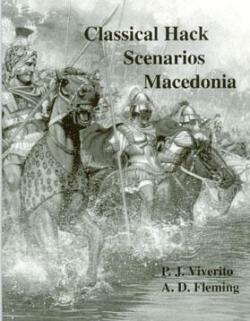 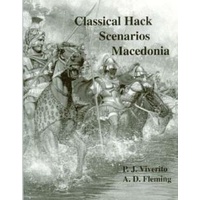 Macedonia is the second in the series of Scenarios books published by LMW Works. All of the Scenarios titles provide historical gamers with a platform to put on historical battles in miniature.

This particular book deals strictly with Macedonian scenarios battles from 358 B.C. to 326B.C. A sequel book will deal with the later Successor armies. Like Classical Hack Scenarios Rome there was just too much information to convey about the Macedonians and later Macedonian systems to have it said and done in one book.

Here's what you get: a brief period-by-period description with tactical diagrams of the armies in each period, and easy to set up battle situations commonly called scenarios. Each scenario gives a brief account of a specific battle, including opposing orders of battle, special tactics of both armies and victory conditions. The scenarios have been designed by Philip J. Viverito and Allan D. Fleming noted game masters at Cold Wars Historicon and Fall In!. Both have years of gaming experience and their ideas and ideals are a worthwhile contribution to gaming and historical writing.

If that's not enough the book uses the new D-10 system of Classical Hack Second Edition, up-dates to Special Add-on Tactics, new Siege Rules, the Siege of Tyre scenario, Tyre Q.R.S., the new Siege Engine unit generating system, a list of Alexander's Companions, orders of battle for opposing armies, dated changes in Alexander's army, and a bibliography. In short everything you would have to figure out is provided for you to set up a research historical Macedonian engagement in miniature.

Classical Hack Scenarios is designed to assist ancient gamers regardless of their game system.