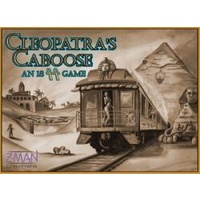 
In a slightly satirical turn, Cleopatra's Caboose uses many well-known Euro-mechanics. In this game, players place trains, construct buildings and utilize the special abilities of Egyptian Rail Baron Gods to build a network of rail throughout Ancient Egypt to deliver fruits to cities that demand them. However, players must be mindful of several things while playing the game. They have a limited number of actions, money and time. Money is used to win crucial auctions and place trains (and to construct the occasional Pyramid), while fruits provide money to the shrewd player who delivers them, or allows a player to construct buildings which will provide victory points and possibly increase a city’s Prestige.