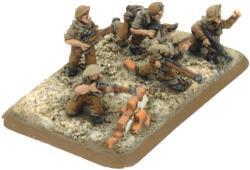 No matter what higher headquarters or the papers say, the real fighting is done by the infantry soldier. With little fanfare they are the ones that slog through the terrain regardless of weather and overcome the enemy in their bunkers.

When the battle gets tough make sure you have enough infantry around to carry the battle in your favour. The third rifle platoon’s arrival can easily be the difference between success or failure.

The Commonwealth Rifle Platoon also includes the figures to create the Company HQ for your Rifle Company, including additional figures to show that you have upgraded your platoons to have Sticky Bombs.