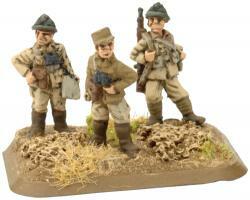 
In 1941 France was a defeated nation. The Germans had installed the puppet Vichy regime, which retained only a thin veil of independence.

However, many were still loyal to the government and its small military would stand up to any enemy invasion.

Meanwhile, Charles de Gaulle had set up a Free French government in exile based in London. From there he called all French volunteers to join his cause against Germany and its allies. Thousands answered his call and he assembled a small Free French military to help the Allies in North Africa.

Although fighting on opposite sides in the war, both the Vichy and Gaullist French forces in Syria still follow the normal French organisations for an infantry company. Each captain commands up to 200 men, whether they are locally raised troops, colonial troops from Africa, or Legionnaires.

The Company Command & 2iC Command Teams in Flames Of War