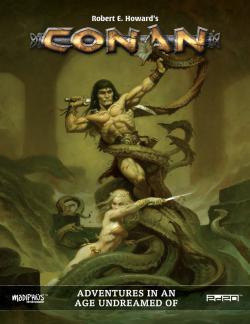 Conan the Brigand is the complete guide to the nomadic brigands of the Hyborian Age, providing the gamesmaster and player characters with all the resources to run campaigns that embrace the path of the brigand, or are affected by it. Here within these pages are all the resources to bring to life this outlaw world!

New material to expand your campaign with brigand themed castes, stories, backgrounds and equipment allowing you to create your own unique brigands, nomads and raiders lie within the book's pages:

- A gazetteer covering the kingdoms that Conan and his brigands raided- Khauran, Turan and the city-state of Zamboula.

- Descriptions of important dignitaries and renegades of the region, including Lord of Khawarizm, Kings Yezdigerd and Yildiz of Turan, Shah Amanurath, Queen Taramis and her devilish sister Salome.

- A guide to running brigand campaigns with all new rules for raiding and plunder and brigand themed carousing events to fill the time between raids. Gods and magic of the nomadic lands including cults of Erlik, Ishtar, Tarim and Yazadi.

- A write up of Conan during the period he lived and breathed the brigand life along with his most notorious followers.

- Guidelines for running a desert nomad camp, recruiting brigands, surviving in the hostile environments of the southeast and descriptions of the rewards and dangers of raiding.

This book requires the Robert E. Howard's Conan: Adventures in an Age Undreamed of Core Book to use. Conan RPG: The Book of Skelos