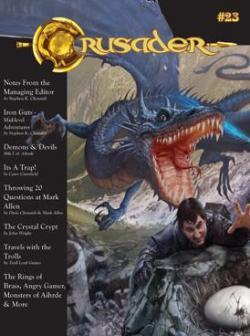 The Crusader is a Journal dedicated to games and the gamers who play them. Within its pages lie a plethora of articles that touch upon many of our common interests. Though each issue sports at least one 'crunchy' bit rules article for Castles & Crusades and/or Gary Gygax's Lejendary Adventure, the magazine's focus is much more broad. The Journal offers articles that range from the common and simple "How To" articles, to advice, fiction, poetry, humor, art and more. Feature articles include the following:

The Journal offers articles that range from the common and simple "How To" articles, to advice, adventures, free dungeon maps, new monsters, fiction, game review, humor, art and more.

Feature Articles
Alea Iacta Est: The Continuation of a three part article. Adventures in the Low Country. We take a look at what it takes to run mid-level adventures, how to balance growing power with monster abilities.

When Caesar stood upon the banks of the Rubicon looking south to Rome he hesitated. Before him stood the vast, complex mechanism of the past, glowing with a host of intricately woven stratagems. With him, he had but one legion, weary from 8 years of brutal war with the Gauls. But when called to surrender himself to the Senate and certain exile he did not hesitate. He called his legionaries to cross into Italy, to cross the Rubicon. And as he did so he said only this: Alea iacta est! The Die is Cast!

20 Questions
Thrown at Mark Allen! Artist Mark Allen who does his best to answer the most pointless questions he's ever been asked!

Fiction
Aihrdian Chronicles, Being the 21st Narrative: Upon the shores at last to begin the final legs of their journey to the Twilight Wood.

New Monsters or Treasures
Monsters of Aihrde: Demons & Devils Come to Castles & Crusade. Samples from the Monsters & Treasure of Airhde

Also In This Issue
Crystal Crypt Adventure!
Angry Gamer: An angry rant for the gamer in all of us.
Travels with the Troll Lord: Davis in JAIL!
Troll Freebies: Maps for your adventuring needs.
Cartoons by Peter Bradley!