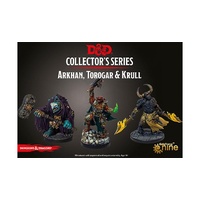 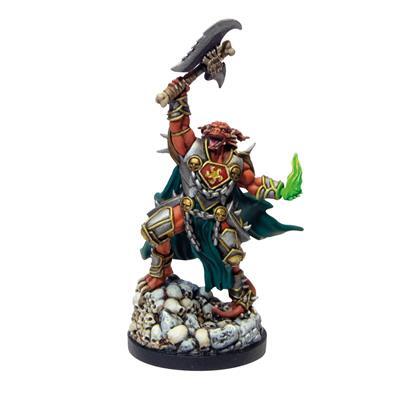 Arkhan the Cruel is a Dragon Highlord Oathbreaker Paladin in the service of the five headed dragon goddess Tiamat. He has returned to Avernus with The Hand of Vecna in order to unlock its powers with the end goal of freeing Tiamat from her prison in the Nine Hells, provided the power of The Hand doesn't kill him first. The clock is ticking as Vecna's necrotic energy corrupts Arkhan's flesh, and is beginning to decompose his body on the left side.

He is accompanied by his minotaur bodyguard Torogar Steelfist, whose dual scimitars are ablaze from his gauntlets of flaming fury, and his tortle Death Priest/Alchemist, Krulll, complete with two-headed War Mal and Draconic Prayers to Tiamat carved into his shell. Krull's main focust is finding artifacts adn elixers to help his master Arkhan assert his will over the power of The Hand of Vecna.

Contents: 3 miniatures with resin components. Miniatures are supplied unpainted. Preparation and assembly may be required.