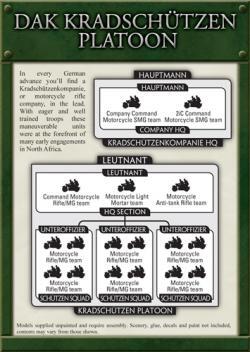 The true tip of Germany’s armoured spear-thrusts are the motorcycle companies and their supporting armoured cars. Fast and mobile they often fight alongside the panzers. Kradschützen companies outmanoeuvre the enemy, speeding through gaps in their lines to capture key objectives.

Although they would later prove unsuitable in the desert conditions and be replaced, at the beginning of the North African campaign the most prevalent motor vehicle in the Deustche Afrikakorps was the motorcycle, with 21. Panzerdivision alone having almost 1000 of them in December 1941.