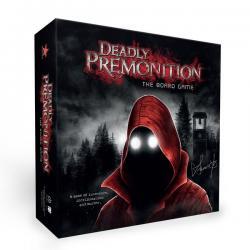 Deadly Premonition: the Board Game

Deadly Premonition: The Board Game is a detective-themed 2-4 player card-based board game inspired by cult sensation video game Deadly Premonition and set in the mysterious town of Greenvale, following the Murder of Anna Graham.

In Deadly Premonition: The Board Game, you and your fellow detectives must take on the task of protecting the innocent, incriminating the guilty, and working out who might not be who they say they are. With a hidden killer amongst the detectives, the race is on to identify a suspect as an accomplice in order track down the true killer.

The board game will be a “Deluxe Edition,” which includes a custom die, original soundtrack, themed gaming cloth, and a download code for the PC version of Deadly Premonition: The Director’s Cut.