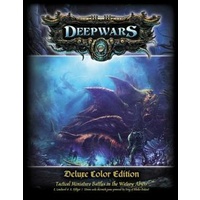 STARTER SETS OF MINIATURES for each of four main forces, Fortune Hunters, Dark Mariners, Ancients of Atalán and the Scaly Horde will be produced. Sets will include five miniatures with stat cards . Other forces are included in the rules and will be made into miniatures as funds permit.