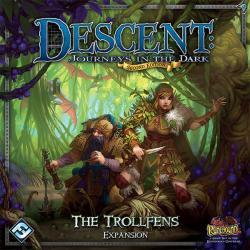 The Trollfens is an expansion for Descent: Journeys in the Dark Second Edition that introduces new heroes,  monsters, classes, quests, and more! In The Trollfens, heroes will venture deep into the wilderness of the Valdari Marsh, where they’ll encounter the vicious troll Bol’Goreth. But there’s more to this foe than simple-minded brutality, and the heroes must work to discover the sinister truth before Bol’Goreth’s evil spills out across the realm.