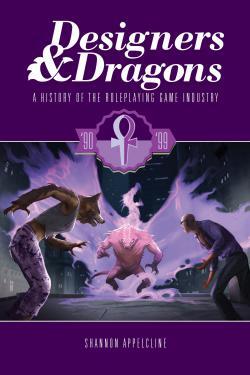 Designers & Dragons: The ‘90s is a comprehensive picture of the heyday of the RPG industry. This 2nd edition expands the original single book into a series of four–beginning with the ’70s and ending with the ’00s–and we’ve added over 10,000 new words to this volume alone. In this volume, we profile an RPG titan—Wizards of the Coast—and cover the rise of storytelling RPG settings like White Wolf’s World of Darkness. Regardless of your gaming background, Shannon Appelcline’s meticulously researched history won’t disappoint.

In this volume, you’ll find: