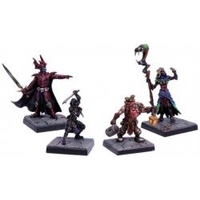 Four of the most infamous individuals to have taken the adventurers coin in the world of Mantica.If you want to live, make sure they’re on your side!

Enric the Butcher of Stryania – Vicious and cruel before he became a Vampire, the former count of Stryania is now a bloodthirsty monster who revels in slaughter. Having murdered his own people, he now stalks the world, ever in search of a way to slake his unnatural thirst.He takes payment in blood, and is not especially fussy as to whose.

Gunn the Dwarf Engineer – Gunn had far too much of a thirst for excitement for the liking of his fellow engineers, finding himself expelled from their ranks after an attempt to ‘improve’ a Steel Behemoth.Now he roams the world as an adventurer, hiring himself out to those in need of his particular skills with the mechanical.

Ravenna the Witch – The wizards of the Golden Horn view Ravenna with suspicion, dismissing her magic as mere parlour tricks and trickery.Certainly, she has a penchant for the theatrical, but this powerful Druid should not be underestimated.Said to have been sent forth by the Green Lady herself to fulfil some obscure quest, Ravenna is single-minded and tough, and those who have hired her swear by her abilities.

Helkan Da’rresh, Twilight Kin Assassin – The Shadows are a dark legend amongst the mortal races of Mantica, a half-believed myth of deadly killers who strike from the shadows using poison and blade before slipping away.Few outside their secretive order know anything of substance about them.It is whispered that Helkan was one of their finest practitioners, though like most things about him, the truth of this is unclear.That he is a cold-blooded and efficient killer however, is beyond question.

This set contains 4 metal models to be used with the Dungeon Saga Adventurer's Companion, including: