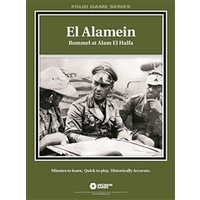 El Alamein: Rommel at Alam El Halfa
In August 1942, Erwin Rommel, the “Desert Fox,” had just completed his masterpiece of the desert war, breaking the British Eighth Army at Gazala, capturing Tobruk, and driving deep into Egypt. The British reformed near El Alamein, just 90 miles from Alexandria. After the repulse of a hasty attack in mid-July, Rommel orchestrated a more careful assault for the end of the month. His mobile troops were to swing wide into the desert to flank the British line and unhinge it. Eighth Army was waiting, forewarned by ULTRA intercepts. Its new commander, Bernard Mongomery, arrayed his armor along the ridge of Alam el Halfa. The German assault would pit the tactical finesse of Afrika Korps against greater numbers of tanks and guns. A German victory might complete the clearance of North Africa; a British victory could spell the end of Afrika Korps.
El Alamein uses the Fire & Movement system designed around the realities of mechanized warfare, giving motorized and/or specially-trained units clear advantages. Players can augment units at the instant of combat with support fire, provided by weapons ranging from mortars through cannon and light ground attack aircraft to heavy bombers. A seemingly predictable assault can be overturned at the last minute by heavy defending fires, while even small units may develop tremendous offensive punch with the assistance of a heavy bombardment. Winning the battle is a matter of maneuver, firepower and asset management.
Game Contents:
• 17 x 22” map
• 100 die-cut counters
• One Standard Rules booklet for this series
• One Exclusive Rules booklet for this title
Skills:
• Players: 2
• Level: Brigade/Regiment
• Hex: 1.5 miles (2.4 km)