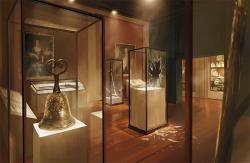 “The Pharaoh Nephren-Ka built around it a temple with a windowless crypt, and did that which caused his name to be stricken from all monuments and records. Then it slept in the ruins of that evil fane which the priests and the new Pharaoh destroyed, till the delver’s spade once more brought it forth to curse mankind.”
–H.P. Lovecraft, The Haunter of the Dark

Despite the nagging doubts that plague you now, there is little chance that you could have possibly been better prepared for this dig. You had participated in many exciting and contentious scholarly debates centered around this area of Dashur and the relic known as the “Eye of Light and Darkness.” This was your area of expertise, and you knew that there was little evidence to support the hoarse ravings of the crazed old man who burst into your office following one such debate. He had rambled on about “Nephren-Ka,” chambers sealed in eternal darkness, and ancient faceted stones that whispered into one’s mind. Who would have believed such things? Now, huddled in the dark, you hear voices speaking in long-dead languages behind walls that have been unopened for untold centuries, and you wish you had considered the wisdom the madman had offered. For the first time in your scholarly career, you truly dread what you may learn.

An eternal tyrant struggles to return to life from beneath the scorching sands of Egypt in Omens of the Pharaoh, the newest expansion for Elder Sign, a cooperative dice game that takes a team of investigators into the dark corners of H.P. Lovecraft’s terrifying mythos. Based on the Dark Pharaoh expansion for the Elder Sign: Omens app, a team of investigators must travel to Cairo and join an expedition to stop the rise of the Dark Pharaoh Nephren-Ka. This dread ruler seeks to return from beyond the grave and continue his blood-soaked reign of terror. What otherworldly forces have preserved Nephren-Ka for all this time, and how can such a being be stopped?

Secrets Beneath the Sands of Dashur

Even with all the precautions that were taken to seal away both the memory and the man himself, the shadow of Nephren-Ka still lingers in the ruins near Dashur. Unbeknownst to the archaeologists, they have begun to uncover chambers that, for the safety of mankind, should have remained sealed and hidden for all time. Now, the Dark Pharaoh himself begins to stir, and the investigators have no choice but to continue to explore the ruins with great care, in hopes of finding the key to stopping the full return of Nephren-Ka.

As alien creatures emerge and prowl the ruins, your team of investigators will need to prepare themselves for the horrors that await them in Dashur. Omens of the Pharaoh not only includes this new terror, but a brand-new mode of play. The new Lightless Pyramid mode allows the investigators to travel back and forth between the relative safety of Cairo and the darker dangers of Dashur. Savvy investigators will learn the value of gathering supplies and performing some valuable research before venturing out, but shouldn't be afraid to beat a hasty retreat when needed.

The rulers that came after the horrific reign of Nephren-Ka decided that his name and deeds should be utterly stricken from the annals of history, lest some fool attempt to seize upon the same wellspring of power that fueled the Dark Pharaoh. Unfortunately, this precaution has left the investigators at a great disadvantage, and your team’s ignorance of the threat that they face may spell certain doom for the world. Furthering the research of the expedition’s archaeological dig will give the investigators a chance to gain some advantages against the encroaching darkness. Adding tokens to "The Expedition" scenario sheet will apply what little you can learn at the dig sites to bolster your chances of survival.

The rise of Nephren-Ka is imminent, and the investigators will need to work continuously to stop his return. New to the Omens of the Pharaoh expansion, players can gather powerful relics to aid in their fight. These artifacts will give the investigators a fighting chance against the darkness by providing them with a chance to reroll dice and other advantages.

No matter how well prepared the investigators may be, the pressure will always be mounting. Dark Pharaoh special adventures must be regularly completed in order to stop the Ancient One from waking. While staving off the Dark Pharaoh’s encroaching presence, the investigators can also risk exploring the long-sealed hidden chambers in search of elder signs. Even with new and powerful relics in hand, will the onslaught of ancient evils be too much for the beleaguered investigators? Will they be able to gather the elder signs they need to stop the return of the menacing Nephren-Ka and seal him away once again?