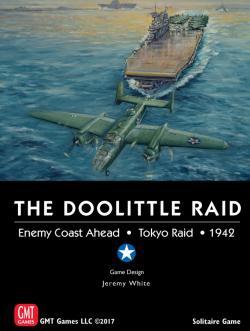 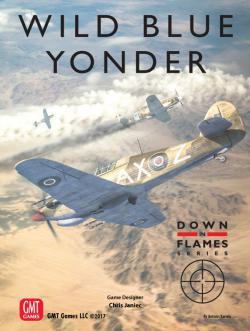 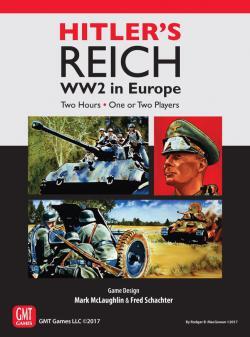 Enemy Coast Ahead: The Doolittle Raid uses the game format to explore the first raid on the Japanese home islands by the United States during World War Two. It is a solitaire game challenging the player to conduct a successful mission where the criteria for success is not purely military. The player must organize, equip, and train a squadron of B-25 medium “Mitchell” bombers to attack a distant and rather dangerous target. The game not only covers the raid from launch to landing, it extends the story on both ends. Threatened from the air and from the sea, the player must do his utmost to strike the Japanese capital, avenging the attack on Pearl Harbor, and then land his aircraft safely. If the raid goes poorly it may boost Japanese morale and deflate the mood in the United States. Getting the B-25s close enough to launch is vital, as is the recovery of aircraft and crewmen, but above all, the player’s main dilemma will be secrecy. The risk is great. Failure could mean the loss of an entire squadron, or worse, the sinking of a precious aircraft carrier. Will the Doolittle Raid add to the dismal news of Pearl Harbor, Guam, Wake Island, and Bataan, or will it signal the turning of the tide?

The History
Washington – April 21, 1942: After two days of rumor prompted by Japanese radio broadcasts, President Franklin Delano Roosevelt finally agrees to a press conference. Deftly avoiding difficult questions, he claims insufficient information to neither confirm nor deny the biggest news story of the four month old war. To placate tenacious journalists, however, he tells the press that the attack on Kobe, Osaka, Nagoya, and Tokyo by United States aircraft, was launched from a mysterious base he would only call “Shangri-La,” an imaginary island from the recently published novel Lost Horizon. His impish grin, if not his words, tell the press that the top secret operation dubbed Special Aviation Project Number One has indeed been a success.

That same day China’s foreign minister hands a telegram to Army Air Corps Chief Hap Arnold. It has taken some time to arrive in Washington, an indication that all may not be well with the mission. Dictated two days ago by the commander of that top secret operation, a distraught Lt. Colonel James Doolittle, it reads:

Mission to bomb Tokyo has been accomplished. On entering China we ran into bad weather and it is feared that all planes crashed.

Telegram in hand, Arnold immediately admits to the commander of the Joint Chiefs of Staff that the mission has failed. No bombers have been recovered. After sending that telegram, Doolittle himself expects a court marshall, confiding to his engineer that they’ll tie him to a desk for the rest of the war, if he’s lucky. Days later he is astonished to learn of his promotion to Brigadier General, and even more so when he is notified that the president recommended the Congressional Medal of Honor.

The Doolittle Raid remains an enigmatic and contradictory episode of World War Two, defying easy interpretation even to this day. Was it a victory or a debacle? Was it a minor footnote in the annals of that war or a significant military event? Was it a desperate bid to avenge the attack on Pearl Harbor, or, a harbinger signaling death and horror soon to visit Japanese cities from the sky?

Narrative Sequence
Much like chapters in a story, the game is organized in six narrative segments, chronologically arranged. Each poses its own set of challenges and prompts decisions that establish the environment and conditions of subsequent chapters.

Historical Scenarios
Besides play of the full narrative, the game offers a number of historical dissections, each a scenario focusing on a fragment of the raid. They are also a handy way to learn the game, since each scenario uses only part of the rules. For example, Scenario One covers Doolittle’s flight over Tokyo, using only the 8.5x11 Target Map and the Attack Segment. An alternative scenario looks at a night raid by that flight, as Doolittle originally planned it. After playing one or two small scenarios using only the Attack segment’s rules, a larger scenario can be played adding the Flight segment. Graduate next to an even larger scenario that starts with the Naval segment. In this way a player can learn the game in program fashion, little by little, studying the history of the raid by playing it as he learns.

Player Aid Folders: The game comes with several 11” x 17” bi-fold aids allowing the play of each game segment with minimal study of the rule book. The mapsheet is designed to interlock with other game components, including those play aids, in order to make the player’s experience fluid.