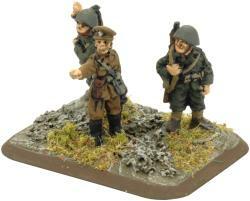 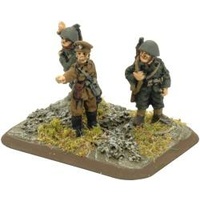 Highly motivated, the Greek infantryman’s equipment is a collection of WWI-vintage light machine-guns and rifles. His uniform varied from captured Italian gear to British uniforms and helmets.

Under the direction of the Ypolochagos, or lieutenant, the French-style VB grenade launchers or captured Brixia 45mm mortars can silence heavy machine-gun emplacements.

The blister contains everything you need to a complete Etaireia Pezikoy HQ as featured on page 37 of Burning Empires. This includes the two optional Boys Anti-tank Rifles and the optional Light mortar team.

Also included in the pack four extra Greek Officer figures to replace or upgrade any your Italian Command teams to have Greek Officers instead.

The Boys Anti-tank Rifle in Flames Of War

The 60mm Mortar Team in Flames Of War

The VB Team in Flames Of War

The Brixia Mortar in Flames Of War