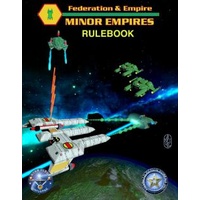 For years, players have wondered what effect the Lyran Democratic Republic, the Vudar Enclave, and the Seltorian Tribunal would have had on the General War. Wonder no longer! Play these empires and find out for yourself.

The Lyran Democratic Republic is more than just a renegade province of the Lyran Star Empire. It is a vital balance point between the Lyrans and Hydrans. In Wall Cloud, find out what would have happened had the LDR reunited with the Lyrans.

The Vudar Enclave has far different than the Klingons tricked the Federation into believing, but it was still a player in the final years of the General War. They locked up territory in a "neutral" enclave that was secretly much closer to the Klingon Empire than thought. Find out about "The Hole," containing a secret shipyard and fleet. In Static Fog, the Klingons decide to crush the Vudar. In Electric Storm, the LDR and Vudar decide to carve new empires from old.