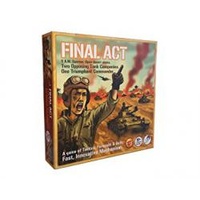 Final Act is an abstract, simultaneous move game of tank versus tank action, using an innovative "control panel" system that lets players program their moves--for up to seven tanks each-- quickly. Both the direction the tank moves and where it points are covered with quick dials and then revealed to the opponent after both sides have finished.

Designed by Sharon Katz, who actually commanded a tank in the Israeli Army, Final Act is not linked with any specific historical period.

Players plan their moves place their shots, and then maneuver their tanks according to the plan. If tank and shell end up in the same space, one "hit" takes place. Two hits knock out any tank.

Before the game begins, each player may locate certain kinds of terrain pieces—swamp, minefield, berms—that can help their defense or impact how they want to attack.

To win the game, a player needs to move one tank to the "last line of defense" row of the opponent.