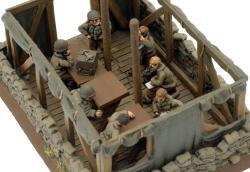 A Fire Direction Center (FDC) quickly consolidates the fires of heavy and light weapons in order to unleash a truly heavy bombardment upon a known target. Located with the corps or divisional big guns, they also coordinate the fires of non-artillery weapons into the overall fire support plan.

Linking to FDC
The Fire Support Net is a communications net that gives any unit with the proper training, artillery registration, and radio sets the ability to link with an FDC team.

Any platoon with a Staff team is automatically linked to the FDC team.

Any platoon listed under the Supporting Fire special rule can link to an FDC team by deploying their platoon’s Command team within Command Distance of the FDC team at the start of the game.

Supporting Fire
The FDC connected numerous other types of weapons as well as normal artillery batteries into the Fire Support Net. This allowed many different types of weapons to fire in Coordinated Bombardments.

The following US platoons may link to the FDC team:

While linked to an FDC team, these units can use any Observer team that is linked to the FDC team to spot for them.

Once any of the gun or tank teams in the above platoons have moved or the platoon is no longer linked to the FDC team, the platoon cannot use the Coordinated Bombardment nor the Supporting Fire rule for the rest of the game.

All tank or gun teams in a platoon that are linked to the FDC team and do not have a staff team must remain stationary to maintain that link. If any of these teams moves, then the whole platoon loses its link to the FDC team for the remainder of the game.

Digging In or rotating in place does not break the link to the FDC team.

Coordinated Bombardment
Once a target was identified, an FDC team could direct additional artillery batteries and supporting gun platoons upon that target to ensure its destruction. Additional indirect fires were added until the “Area Well Covered” message was received from the observer calling the fire.

Once an observer team linked to the FDC team has Ranged In on an Aiming Point, you may choose to have it call for a Coordinated Bombardment.

A Coordinated Bombardment consolidates the fire of the Artillery Battery that the Observer team was spotting for, and any other platoons linked to the FDC team. (Adding a four-gun battery to the initial four-gun battery will result in an eight-gun battery bombardment).

- Nine or more, then use a double-width Artillery Template and re-roll all failed to hit rolls.

If you choose to fire a Coordinated Bombardment you may not fire a Time On Target Bombardment (see page 161 of the rulebook).

A Coordinated Bombardment with three or more 155mm howitzers in the bombardment gains the following:

- Otherwise the number of lighter weapons dilutes the effect of the 155mm howitzers and all of the firing weapons have an Anti-tank rating of 4 and a Firepower rating of 3+.

A Coordinated Bombardment with two or fewer 155mm howitzers uses the worst Firepower and lowest Anti-tank rating of all the types of weapons involved (see page 133 of the rulebook).

Otherwise the number of lighter weapons dilutes the effect of the 155mm howitzers and all of the firing weapons have an Anti-tank rating of 4 and a Firepower rating of 3+.