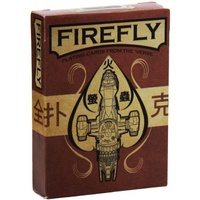 While it might not qualify as a regulation Tall Card deck, for playing Earth-That-Was card games, there’s nothing quite so versatile as a standard 54-card poker deck. And when it comes to the best poker decks, there is no better brand than United States Playing Card Company, also known as Bicycle. QMx teamed up with renowned Browncoat artist Ben Mund (of Serenity Blueprints and Atlas of the Verse fame) and Bicycle to create the first-ever officially licensed Firefly Playing Cards. The deck consists of the standard four suits of 13 cards each plus two jokers, and features designs that are anything but standard. Whether it’s Vera on the Jack of Clubs, the companion taking a sponge bath on the Queen of Diamonds or Serenity herself on the Ace of Spades, Firefly Playing Cards are a uniquely Versey experience, sporting dozens of unique works of art. There’s even a Easter egg or two for the sharp-eyed to find! Printed on Bicycle-grade paper with a satiny embossed finish, every inch of this deck is designed with Firefly in mind. Whether you’re betting cashy money or chores (two bonus chore cards included with the deck to help with that), you can look forward to many hours of fun and games with the Firefly Playing Cards.