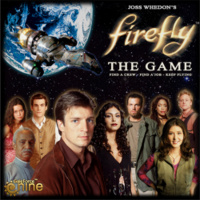 Firefly The Board Game

“After the Earth was used up, we found a new solar system and hundreds of new Earths were terra formed and colonized. The central planets formed the Alliance and decided all the planets had to join under their rule. There was some disagreement on that point. After the War, many of the Independents who had fought and lost drifted to the edges of the system, far from Alliance control. Out here, people struggled to get by with the most basic technologies; a ship would bring you work, a gun would help you keep it. A captain's goal was simple: find a crew, find a job, keep flying.”
– Shepherd Derrial Book

Firefly, the popular television series created by Joss Whedon, comes to life in a new boardgame from Gale Force Nine and Twentieth Century Fox Consumer Products. Compelling characters, great storytelling and an evocative universe has made Firefly a fan-favorite for the past ten years.  Now fans of the television show and board games can chart their own course with Firefly: The Game.

In Firefly: The Game, players captain their own Firefly-class transport ship, traveling the ‘Verse with a handpicked crew of fighters, mechanics and other travelers.  As a captain desperate for work, players are compelled to take on any job -- so long as it pays.  Double-dealing employers, heavy-handed Alliance patrols and marauding Reavers are all in a day’s work for a ship’s captain at the edge of the ‘Verse.  Firefly: The Game is a high-end thematic tabletop boardgame from Gale Force Nine.  It will be the first in a series of tabletop hobby boardgames and miniatures games from GF9 set in the Firefly Universe.

“Building on the success of Spartacus: A Game of Blood and Treachery, we're thrilled to be making a game that evokes the heart and themes of Firefly - the best ‘gorram’ show in the 'Verse.” said John Kovaleski, CEO of Gale Force Nine, “With challenging game play, fantastic production values and compelling narratives, you and your fellow captains will want to head out into the big black again and again".