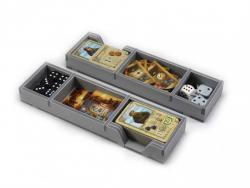 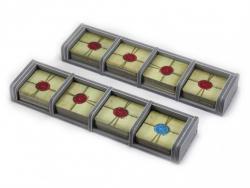 The Voyages of Marco Polo

This insert is designed to be compatible with The Voyages of Marco Polo®. The insert has space for both the “The New Characters” mini expansion® and “The Agents of Venice”® expansion. The design provides both efficient storage and improved game play. Many of the trays can be utilised during the game, and they greatly aid set-up and clear-away times. The boards and player boards act as a lid on top of the trays.

Note: when fully loaded with the original game and both expansions the box lid does not fully close flush with the box. There remains a 3-4 mm gap due to the additional board of the Agents of Venice expansion.