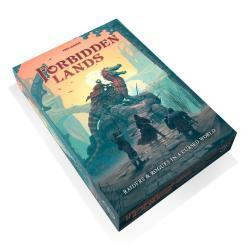 It is said that the first six elves of the Forbidden Lands – the ones who planted the trees, drew the furrows of the rivers and gave the animals their home – after completing their mission, had their rubies gathered in the royal crown, Stanengist, the name of which means “The Hanging Stones.” In the crown they rested deservedly, but at the same time, kept watch over their creation and gave advice to their descendants.

For a long time, the crown was worn by the kings of the land and granted them the power to keep the kingdom intact, but sometime right before the humans arrived in Ravenland, the thief Merigall stole three of the stones from Stanengist, and the land has been sundered ever since. Whoever re-assembles the stones in the crown and places it on her head shall according to legend gain the power to rally all kin and rule over the Forbidden Lands.

The stonesinger Brander of Bynd is said to have received a vision from the god Huge in which he saw the lost elven rubies set into the scepter of a king, the jewelry of a queen, and a sword that slays giants.

Raven’s Purge is an epic campaign module for the Forbidden Lands RPG, written by acclaimed fantasy author Erik Granström. Raven’s Purge is not a linear story and it has no set goal that the adventurers are expected to follow. Instead, it is a rich tapestry of legends, locations, characters and events that the players can interact with in a multitude of ways. Contents of the 224-page hardcover book:

From the creators of the award-winning RPGs Tales from the Loop, Coriolis - The Third Horizon and Mutant: Year Zero.