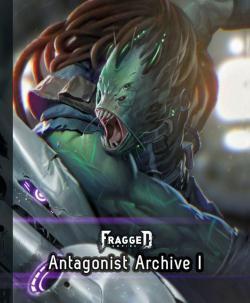 The Antagonist Archive 1, is the first major supplement for Fragged Empire RPG. Set in a post-apocalyptic future, Fragged Empire sees four non-human races seek to build a new society for themselves after barely surviving a genocidal war in a brand new science fiction setting from up and coming designer Wade Dyer.

The Fragged Empire Antagonist Archive 1 is the perfect addition to add even further depth to your Fragged Empire adventures, with  a compendium of factions, locations and NPCs for your players to contend with, against, or perhaps even convert to their cause.

Inside the Fragged Empire: Antagonist Archive 1 players will get to explore the darker corners of the Habrixis Sector and the Haven System encountering new allies and enemies to populate their roleplaying adventures.

Herein you’ll find detailed descriptions for new factions and locations, plus a wealth of information on Mechonids, pirates and feral Nephilim, with additional rules, details and spacecraft write-ups and stats to power your journey through the stars.