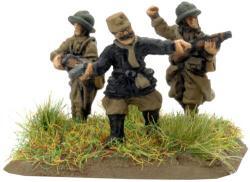 The French infantry divisions were easily the best equipped in the world for First World War-style trench warfare. Every battalion had a resupply section with Renault UE carrier. These could be used to carry or tow the battalion’s weapons into position across shell-torn ground under fire, but more importantly, they could resupply the battalion under fire.

An infantry battalion consumes immense amounts of food and ammunition, so every night in the First World War long columns of soldiers make their way up to the front-line trenches, laden down with supplies. Every night the battalion lost soldiers from these supply parties to artillery fire. Now, with the Renault UE carrier available, supplies can be delivered quickly and safely by an armoured vehicle.