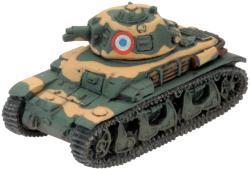 The Renault R-35 was a light infantry support tank designed to replace its predecessor, the FT-17. It was well armoured but it Renault four-cylinder 82hp engine only archived a top speed of 19.2km/12mph. With this limitation, it was well suited in its role supporting infantry.

The R-35 played an important role in the French rearmament programme in the 1930s and the tank equipped no less that 23 battalions by the time of the German invasion in 1940.

Armed with a 37mm SA-18 main gun and a 7.5mm co-axial machine-gun, it two man crew were protected by up to 45mm of armour. However, the one-man turret meant the commander was responsible for locating potential targets, traversing the turret, loading and laying the gun as well as providing directions for the driver.

After the French capitulation, the remaining R-35s fell into the hands of the Germans. These captured vehicles were used for training and policing purposes and some even saw action again against the Allies after the invasion of Normandy in June 1944. The remainder were giving to the Italians and saw service in the desert during the campaign in North Africa.

The Renault R-35 in Flames Of War