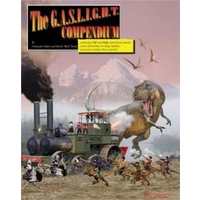 Victorian era miniature gaming appeals to the highly creative modellers and wargamers among us who want to create fantastic machines, only to see them fight and fail in battle. Many wargame rules attempt to exactly model reality, and they must specify the exact number and position of gun and machine-gun turrets on a particular fighting vehicle, as well as the realistic capabilities of the weapons mounted inside them. To play miniature wargames, historically accurate, precision-tooled scale models must be purchased, and superbly painted to match the high standard of craftsmanship exhibited by wargamers today. This can be frustrating, if the number of rivets or track sections on a particular vehicle model turn out to be incorrect upon close inspection by a passionate rivet-counter.

Adventures in Victorian fiction provide a welcome change of pace from historical simulations, if miniature modellers are encouraged to build their own equipment from scratch. Plastic bottle caps, coffee stirrers, shampoo bottles,cream cheese containers, handles of disposable razors, cardboard tubes, jewellery chains, popsicle sticks, and other suitable parts can be used to build fascinating steam-powered vehicles, amphibians, naval vessels, and aircraft. Fleamarkets are an excellent source of cheap plastic toys which only need to be modified and repainted to pass as Victorian fighting machines. The creative potential is endless, and Gaslight provides the game rules to drive, sail, fly, fire, and destroy any secret weapon design a player could possibly come up with. Rather than develop a Victorian world of their own, and the expensive miniature merchandize to go with it, the creators of Gaslight designed random generation tables to fit the figures, weapons, vehicles, and monsters we already have in our collections. This is a truly liberating idea for wargamers, and for sci-fi modellers interested in taking their scratch-built designs off the shelf, and play-testing them.

Vehicles and conveyances need to have their engines started and sustained throughout the game. Part of the fun is that engines may conk out at the wrong moment, and critical hits may damage or jam certain components, making the vehicle difficult or impossible to control. Regular troops may be less imposing than Victorian fighting vehicles, but their combat abilities are relatively predictable and more consistantly reliable. With the exception of some special abilities of main characters and extras, the infantry, cavalry, and artillery rules in Gaslight are straightforward, easy to implement, and conceptually similar to those used in historical miniatures games. Fantastic small-arms and heavy weapons may be generated to provide the infantry with better anti-armour and anti-personnel firepower. Some of these weapons might launch grenades, but their range may be too short, and they make take too long to reload to be suitable for combat. If all else fails, an heroic main character may have to stop an attacking creature or steam tank with a Webley revolver.

Toy stores, fleamarkets, and cereal boxes offer an unbelievable variety of strange creatures which would be nice to have, if they were useful to miniatures gamers. Some of these creatures may have to be dull-coated or re-painted to make them compatible with existing wargame figures, but many can be used as they are. Gaslight provides the random creature generation table to turn these plastic critters into serious opponents, some of which may turn out to be slow, weak, and not too aggressive, if you’re lucky. The element of surprise is a defining element in Gaslight, unlike other rules which require multiple source books to spell out every minute detail, every strength and weakness of a potential opponent to a point where the fog of war is lifted completely. There is plenty of fog of war in Gaslight. The game master may decide to move a fast creature very slowly to lead players on, and armour characteristics might be kept secret until a strange creature has been killed and medically examined.

Got some of my best plot ideas from playing Gaslight. -- Jules Verne

Jules Verne and H.G. Wells probably would have loved Gaslight, if the rules had been available then. Colonial wargamers will find Gaslight easy to mix and match with The Sword and the Flame or similar skirmish and Western Gunfight games which lack the vehicle and creature rules for a stimulating what-if scenario. And, there is no reason why Ancients or Napoleonic wargamers should forgo the intense experience of meeting a strange creature on the gaming table. Allow Gaslight to inspire you.