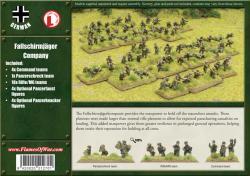 Some of the best infantry units fielded by the Germans during World War Two were the regiments of the Fallschirmjägerdivisions or parachute divisions. Although they were actually Luftwaffe troops, by the time the Normandy campaign had begun these units were subordinated to Army command.

These units proved their worth over and over again during the fighting in France, in Holland during Operation Market Garden and during the Italy campaign.