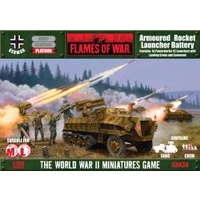 The Panzerwerfer 42 is the name for the German half-tracked multiple rocket launcher.

The 15cm Panzerwerfer 42 auf Selbstfahrlafette Sd Kfz 4/1 (based on the Opel Maultier, or "mule", half-track) first went into production in April 1943, and was produced until March 1945.

It was mainly produced by Opel. During its production 300 Panzerwerfers and 289 Munitionkraftswagen were made. The Munitionkraftswagen, or Sd Kfz 4, was the exact same vehicle without the rocket launcher and was used for ammunition re-supply.

The Panzerwerfer 42 in Flames Of War