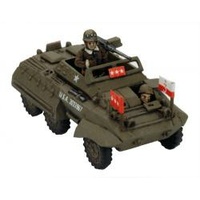 Patton graduated from West Point in 1909 and was commissioned into the US Cavalry. He joined the US Olympic team for the 1912 summer games, competing in foot and equestrian racing, swimming, fencing, and pistol shooting events.

Then, in 1916, Patton carried out America’s first armoured attack when he took three armoured cars to hunt down and kill two of Pancho Villa’s closest generals, one of which was shot by Patton himself. His bold actions in Mexico won him command of the new 304th Tank Brigade during the First World War, where he was wounded in combat.

Following Germany’s blitzkrieg campaigns of 1939-40, the US Army underwent a rapid expansion of its tank forces and Patton was promoted in 1941 to Major General to take command and train the 2nd Armored Division during the Louisiana and Carolina Maneuvers.

After the US entry into the war, Patton commanded the I Armored Corps during the invasion of North Africa in late 1942. After the defeat of II Corps at Kasserine Pass, Patton was promoted to Lieutenant General and took command of the demoralised troops. Through hard work (and a liberal use of profanity) Patton brought the disheartened men around and won victory at El Guettar in March 1943.

Patton was then given command of the Seventh Army for the invasion of Sicily in 1943, where he raced with his rival, British General Bernard Montgomery, to Messina. But it was Sicily where he slapped two soldiers suffering from battle fatigue. Patton’s career nearly ended when the press got a hold of the scandal, but General Dwight Eisenhower intervened and saved Patton from an early retirement.

In 1944, Patton took command of the Third Army, which came into action during the breakout from the Normandy beachheads. Patton’s hard-charging divisions pushed into Brittany and then struck east reaching the Meuse River on 1 September, where his army ran out of fuel. Through thrift and outright theft, Patton and his staff gathered enough supplies to conduct the Lorraine battles.

When the Germans attacked in the Ardennes on 16 December, Patton reacted instantly, shifting his best divisions north before even being ordered to do so. When he counterattacked on 21 December, he took personal control of the operation, even going so far as to prescribe that the new Jumbo assault tanks should be at the point of every advance.

Patton led his army across the Rhine into Germany and straight through to Czechoslovakia before the war ended. For his achievements Patton was made full General in April 1945. After a warm homecoming tour of the US, Patton returned to occupation duties in Germany. On 9 December he was involved in an automobile accident and died of his injuries on 21 December 1945.

George S. Patton, Jr. is regarded as one of America’s greatest generals. His career was covered in success but is also often marred by controversy. Nonetheless, Patton’s aggressive leadership helped shape an army of citizen soldiers into a hardfighting and unstoppable force.