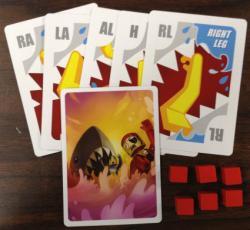 The Get Bit! Sharkspansion is an expansion to the Get Bit! Game that allows a 7th player to play as the SHARK.

Choose one player to play the Shark, and give him the Shark hand. (This increases the number of players needed by 1, making the game a 5-7 player game.) The shark player receives 1 hunger token for each swimmer in the game.

The base game is setup as normal, including the shark not appearing on the first round.

Game play is the same, except that the shark player also puts down a card from his hand when all the swimmers do, and is revealed at the same time.

Like a swimmer, if the shark is ever down to just one card in his hand, he picks up all his cards.

On a miss, the shark loses one hunger token, and picks up the cards he has played. The swimmer in the back does not lose a limb, move, or pick up his cards.