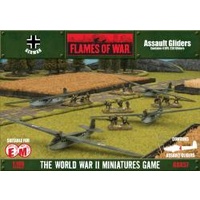 Crete was the first and only operation of the war that saw the deployment of the entire Luftlandesturmregiment, or Airlanding Assault Regiment.

The German DFS 230 assault glider allows small assault parties to land and assault vital positions before the enemy is even aware that they are under attack. The gliders approach the target in a very steep dive at speeds of up to 125 mph (200 km/h) before pulling up for a short landing run slowed by a braking parachute. The resulting attack was swift and deadly.

German DFS 230 gliders have a machine-gun mount above the wing allowing the passengers to fire their machine-gun as they came in to land.