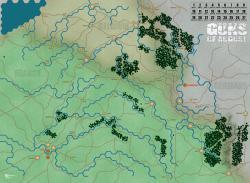 Guns of August Board Game

The Guns Of August simulates the first three months of WWI in the West, when mobility reigned and the fate of France hung in the balance. Game mechanics compensate for players’ 20/20 hindsight to encourage historically accurate play that makes “sense” in game terms while avoiding a “straight jacket” of special rules to force irrational play. Players maneuver corps and divisions through 9-mile wide hexagons in turns that span three days each.

Designed and developed by John Gorkowski and Grant Wylie, GUNS OF AUGUST is the first in a hopeful series of games covering World War I strategic combat.

The game is highly playable solitaire, with very little down time for either player due to the chit draw mechanics.