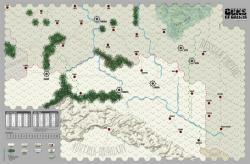 Guns of Galicia (GoG) uses the same core rules as Guns of August (GoA) to simulate Corp-level fighting on the Eastern Front in WWI.