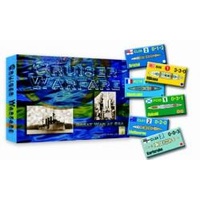 But when war broke out, this tiny force found itself far from home and threatened by the powerful Japanese navy, many times the size of the German squadron. Spee decided to force his way home around the world. After an epic journey across the Pacific, his cruisers met their end off the Falkland Islands in a final battle.

Cruiser Warfare gives the Great War at Sea series its greatest scope yet: the entire world. British, German, Japanese, Italian, Austro-Hungarian, Russian and Dutch ships begin as they did in August, 1914. The German player must disrupt Allied commerce and try to get the cruisers home if at all possible. The Allied player must track them down and destroy them before they can wreak havoc.

Twice, Great War at Sea series games have won the Origins Award as the Best Historical Game of the Year. Cruiser Warfare is the first with a worldwide setting. The world is divided into sea areas, with modified search rules allowing German and Austrian ships to look for prey, and Allied ships to hunt them. Once contact is made, combat is resolved using the standard game rules (or the variant, advanced tactical rules from the Dreadnoughts book).

The entire Japanese fleet of 1914 is present, with new warships never before seen in the series like the battleships Kawachi and Satsuma. The Dutch make their first large-scale appearance in the series, with several coast defense ships plus four battleships never actually completed. These are taken from actual Dutch naval drawings of the two design variations from which the Dutch admirals would have chosen.

The German player has the option of placing a larger cruiser force in East Asia, including the modern armored cruiser Blücher (a proposed addition) and others. Battle cruisers can attempt to break out the join the raiders. There's also an option for a rapid start to the war, which would have found a German summer training squadron of two battleships and a cruiser visiting South America.